Oak trees are characteristic of California. Abundant and easily found, they decorate the landscape from the highway shoulder to the beautiful canyons and hills. They’re long lived and stand with powerful trunks–it’s that same heft that weighs down their branches giving them qualities unique to themselves.

Yet despite their seemingly rough appearance the grey bark and dense evergreen foliage lends some grace collectively producing an elegant, proud tree.

As a native tree they excel in my hot Mediterranean climate. Fed well and allowed to grow freely, it will even rival a trident maple in growth. Their foliage is easily reducible and branching can be highly ramified. Definitely one of my favorite trees, both in landscape and bonsai cultivation.

In 2015 I acquired a small coast live oak from Bob Pressler’s nursery (Kimura Nursery). It sat in a small nursery can and was nearly 5 feet tall. Although lacking good branching it had a nice trunk and rough grey barking.

The tree was fed aggressively to prepare for the repotting and work to come in the following winter. At late winter/early spring I picked a line to do my trunk chop and cut away. Primary branches were left uncut so that they could undergo more thickening before developing secondary branching. 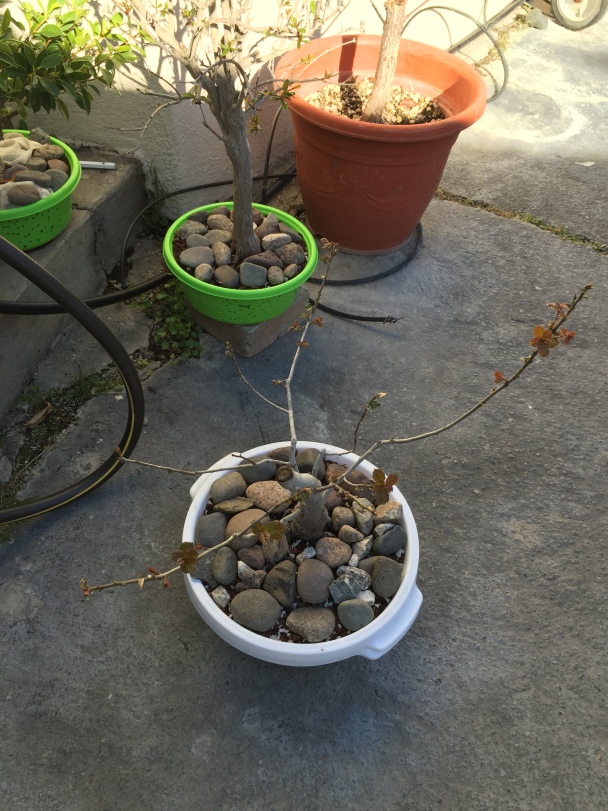 As for the root mass I sawed the root ball in half and worked the outside. Being lazy I did not photograph this part.

The tree was allowed to recover and by early summer showed strong growth all over the tree. I did some preliminary cutbacks and guy wired all my primary branching into place.

As you see in the previous photos I had pretty good budding around my chop with buds occurring right up to the cut line. These shoots would become the future leader of my tree.

The tree was again allowed to recover, this time taking much longer considering that in a single season it had undergo 2 major traumas. Oaks typically have a second flush of growth by late summer but this tree had already expended its reserves and didn’t do much.

After removing excess shoots the top leader began growing very fast. I carved the top cut to allow for a smooth transition.

By fall the tree began thickening a lot. All the carbohydrates and sugars produced by the foliage produce new wood as well as food for next year.

Bark on the trunk began to split as a result of the strong growth. A good indicator that the tree was healthy.

The wires there were propping up a plastic bag over the tree. I don’t know if it helps but I tend to think that the increased heat and humidity will give me better advantageous budding. In any case, advantageous budding indeed. Every single branch is covered in tiny buds–secondary branching no problem!

I came back from the 2017 bonsai-a-thon today (a post to come later) and purchased a pot from Dick Ryerson. The pot is a round with symmetrical groves. It features a cream glaze with some “dirty-ness” in the glaze. There is a spill of red with a hint of some blue on the side. Although slightly big for my tree it will work great as a beautiful pot to carry it through next several years.

I decided that the tree was healthy enough for a repot and given that the root mass in the colander was a similar size to the pot I would not have to do any major root pruning. To fit the tree I cleaned out the center core of the tree slightly–mostly dead roots, organics, and some live tap roots. The edges were very lightly trimmed and the gunky soil from the top of the root ball was raked off. 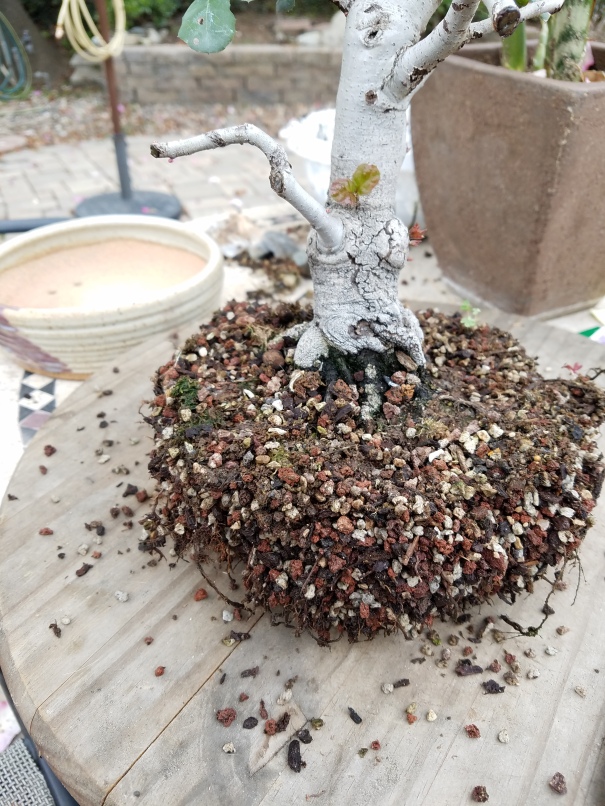 The tree was then wired in with the bottom and edges with new soil. The tree is slightly mounded but it can’t be helped as I want to avoid overly working the root mass. As I continue development I will be able to sink it lower in the next year or two. 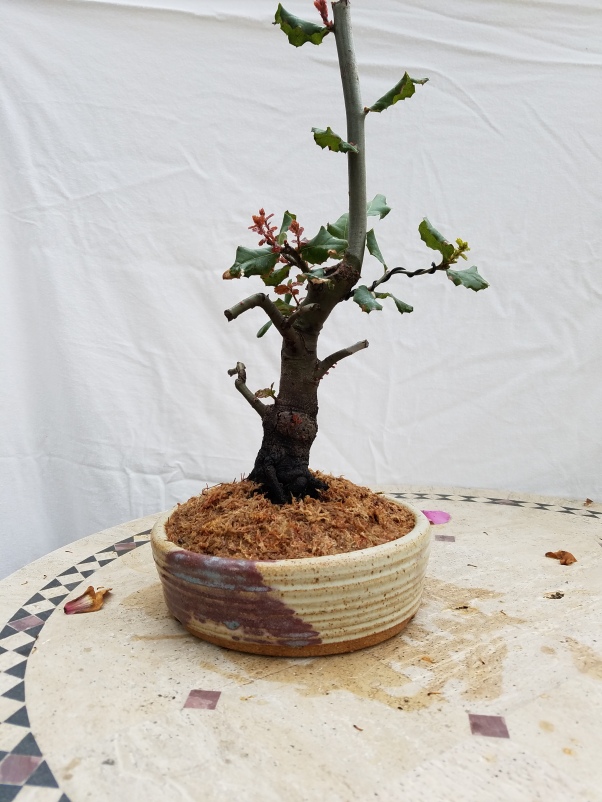 As an added precaution the tree was bagged and will be covered for the next week or so to preserve humidity and ensure the new growth and buds aren’t overly affected by the repotting.

This growing season will be used to create secondary branching as well as to finish thickening the apex of the tree.

Here is a live oak developed by Eric Schrader that’s an extremely realistic representation of what my tree will look like in 5 years or so. His tree was inspiration for mine and I hope that in time it will look just as good if not better 😀

I know its been awhile since my last post but I’ve been incredibly busy with school and other work. I hope you find my posts interesting and if so please leave a comment! A subscription is great too